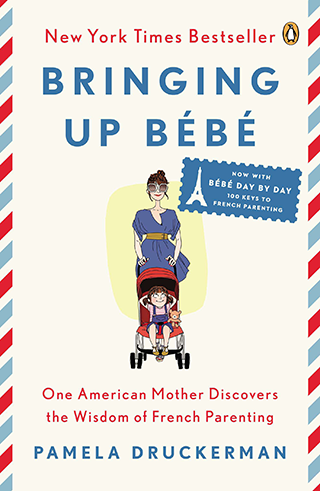 “I’ve been a parent now for more than eight years, and —confession— I’ve never made it all the way through a parenting book. But I found Bringing Up Bébé to be irresistible.”
—Slate

When American journalist Pamela Druckerman had a baby in Paris, she didn’t aspire to become a “French parent.” But she noticed that French children slept through the night by two or three months old. They ate braised leeks. They played by themselves while their parents sipped coffee. And yet French kids were still boisterous, curious, and creative. Why? How?
With a notebook stashed in her diaper bag, Druckerman set out to investigate—and wound up sparking a national debate on parenting. Researched over three years and written in her warm, funny voice, Bringing Up Bébé is deeply wise, charmingly told, and destined to become a classic resource for American parents.

“Marvelous… Like Julia Child, who translated the secrets of French cuisine, Druckerman has investigated and distilled the essentials of French child-rearing.”
— NPR

“The author is a delightfully droll storyteller with an effortless gift of gab that translates well to the page.”
— Kirkus Reviews

“On questions of how to live, the French never disappoint. . . . Maybe it all starts with childhood. That is the conclusion that readers may draw from Bringing Up Bébé.”
— The Wall Street Journal

The Wall Street Journal
February 4, 2012
“Why French Parents Are Superior”

The Leonard Lopate Show (WNYC)
February 29, 2012
An American Mother on the Wisdom of French Parenting

Newsweek
January 2, 2012
What Amy Chua did for tiger mothers, Pamela Druckerman promises to do for French parents.

The Pittsburgh Post-Gazette
February 8, 2012
“‘Bringing Up Bebe’: Why the French make better parents (no offense)”

Babble.com
March 8th, 2012
“Parenting Against the Grain: Why the French model is a big wake-up call”

Babble.com
March 30th, 2012
“The Food and Snacks of Huckleberry Holbrook”

The Daily
February 12, 2012
“Mastering the art of the French stare-down: Parental advice from an expat mother on raising les enfants terribles”

The Wall Street Journal
February 3, 2012
“The Juggle: Are the French Better Parents?”

Macleans (Canada)
February 10, 2012
“Why the French are better parents”

The Cornerstone
March 13, 2012
“Parenting (and schooling) wisdom from the French”

Spiked Review of Books
March 2012
“No bowing down before Bébé”

Pickle Me This
February 27, 2012
Book Review: Bringing Up Bebe by Pamela Druckerman

Dallas News (The Dallas Morning News)
February 7, 2012
“Are the French better at parenting?”