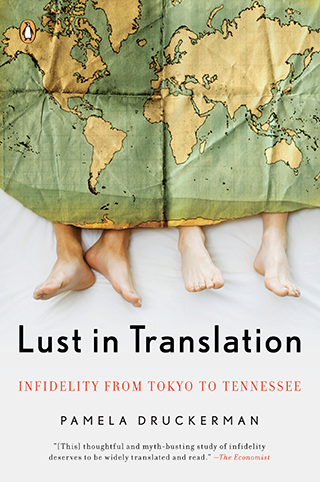 An irreverent and hilarious journey around the world to examine how and why people cheat on their spouses; this global look at infidelity reveals that Americans are uniquely mixed up about being faithful.

It’s an adulterous world out there. Russian husbands and wives don’t believe that beach-resort flings violate their marital vows. Japanese businessmen, armed with the aphorism “If you pay, it’s not cheating,” flock to sex clubs where the extramarital services on offer include “getting oral sex without showering first.” South Africans may be the masters of creative accounting: Pollsters there had to create separate categories for men who cheat, and men who only cheat while drunk.

In America, however, there is never a free pass when it comes to infidelity. According to our national moral compass, cheating is abominable no matter what the circumstances. But do we actually behave differently than everyone else? Pamela Druckerman, a former foreign correspondent for The Wall Street Journal, decided to delve into this incredibly taboo topic. She interviews people all over the world, from retirees in South Florida to Muslim polygamists in Indonesia; from Hasidic Jews in Brooklyn to the men who keep their mistresses in a “concubine village” outside Hong Kong. Druckerman talks to psychologists, sex researchers, marriage counselors, and most of all, cheaters and the people they’ve cheated on, and concludes that Americans are the least adept at having affairs, have the most trouble enjoying them, and suffer the most in their aftermath.

Lust in Translation is a voyeuristic, statistics-packed, sometimes shocking, often funny, worldwide glimpse into the endlessly intriguing world of extramarital sex. It may be politically incorrect to say so, but who knew infidelity could be this fascinating?